Taking into account the development of the basketball sport and constantly changing life requirements, the strategy strives to implement long-lasting and time – proved Lithuanian Basketball Youth players development methodology in country and in long term development strategy include opportunity for every young basketball player to acquire the necessary physical and mental skills, learn basketball techniques and tactics, be able to compete fairly, become responsible, independent and honest person as the system has proved itself in Lithuania.

The program is based on the most important patterns of a young body and personality maturation: from body adaptation to specific basketball practices. When working with young athletes, it is also important to understand the main features of age development and to control their development accordingly. Also link the technical training with the theoretical basis of motion training. The program should help to better plan, control and manage the training process, both in the annual training cycle and on the days of individual microcycles or exercises.

Selecting an athlete for basketball is a specific and important part of a multi-year workout. When training basketball players of all skill levels, it is important to use effective selection tools based on a sportive, pedagogical, social and other research fields (Bompa, Haff, 2009). On the basis of these, the traits of genotypic adaptation should be evaluated and individual abilities necessary for basketball sports should be determined.

Athletic Selection – the process of selecting the best-performing people, beginning with the young athlete’s first steps in sports (Dictionary of Sports Terms, 2003).

The selection of basketball players is a step-by-step process based on the individual analysis of the athlete, taking into account his or her physical, technical, tactical, mental fitness, and development of his or her personality and social skills. The selection of players uses a variety of research methods to help not only identify these traits but also to predict their future development.

A large number of basketball schools creates right competitive conditions in Lithuania and increases the chances of the child to achieve excellence and to reveal the qualities that are best suited for the game.

Selection into basketball has a clear direction of specialization, abandoning superficial, abstract judgments, highlighting the essential attributes of a player’s capabilities.

Athletic selection should help to meet the challenge of selecting prospective players from whom to develop high-performance athletes and to determine their training strategy in the training system.

V. Platonov (2004) associates selection in sports with the perennial structure of sports training. In basketball, we could highlight four important stages in the selection of athletes that have a significant impact on player development.

In Lithuania, the system of athletic selection, starting with the formation of groups of children and ending with the selection of the best players to the national team, is successfully applied in the training of basketball players. Each selection phase is characterized by its own methods and criteria, the accuracy of the evaluation and the categorization of the conclusions. Researchers in sporting activities have found that athletes of different disciplines exhibit specific morphological, functional, and locomotor characteristics (Bompa, Haff, 2009). The broad set of innate and acquired qualities and abilities we present in Figure 2 is important for basketball.

All of these traits may have different levels of expression, so at this age, some players may be more capable of physical fitness and others of locomotive. This selection phase involves the systematic involvement of children in basketball matches, the gradual transition to more demanding exercises, and the acceleration of technical specialization among players – higher by height players being trained as center players and lower ones as playmakers.

The following research methods are commonly used by coaches in their selection:

This selection phase can last up to 5 years. During it, in basketball schools, teams are formed from the most talented players to participate in schools competitions. Basketball sports school usually has a number of teams competing in different levels of championships. The best players are characterized by high motivation, leadership qualities, quick decisions during the game and good tactical thinking. These features are evaluated by the coach, not only watching the children during the competition but also during the practice. However, we cannot rely solely on this information.

In the selection process, objective information is provided by an examination of physical and functional ability using pedagogical tests adapted to basketball players.

Selection is usually done through peer review and examination of physical and functional powers. The following criteria may facilitate the selection of players for teams:

The selection of basketball players for high-skill teams is based on the following criteria:

It is difficult to objectively determine the model performance of players who qualify for national teams and international club teams. However, individual offensive and defense skills and the ability to put them into practice for the benefit of the team are often valued. Figure 3 here are two sets of generalized selection criteria that could be further subdivided into qualitative requirements when tracking players. Different players ‘offensive and defense skills can vary, so the coach’s expertise in matching players’ ability to play in one team is important. In practice, it is often the case that a player is very effective in one team and does not match in another. It is very important to evaluate the tendencies of changes in competitive achievements and the objective reasons for their improvement or deterioration. 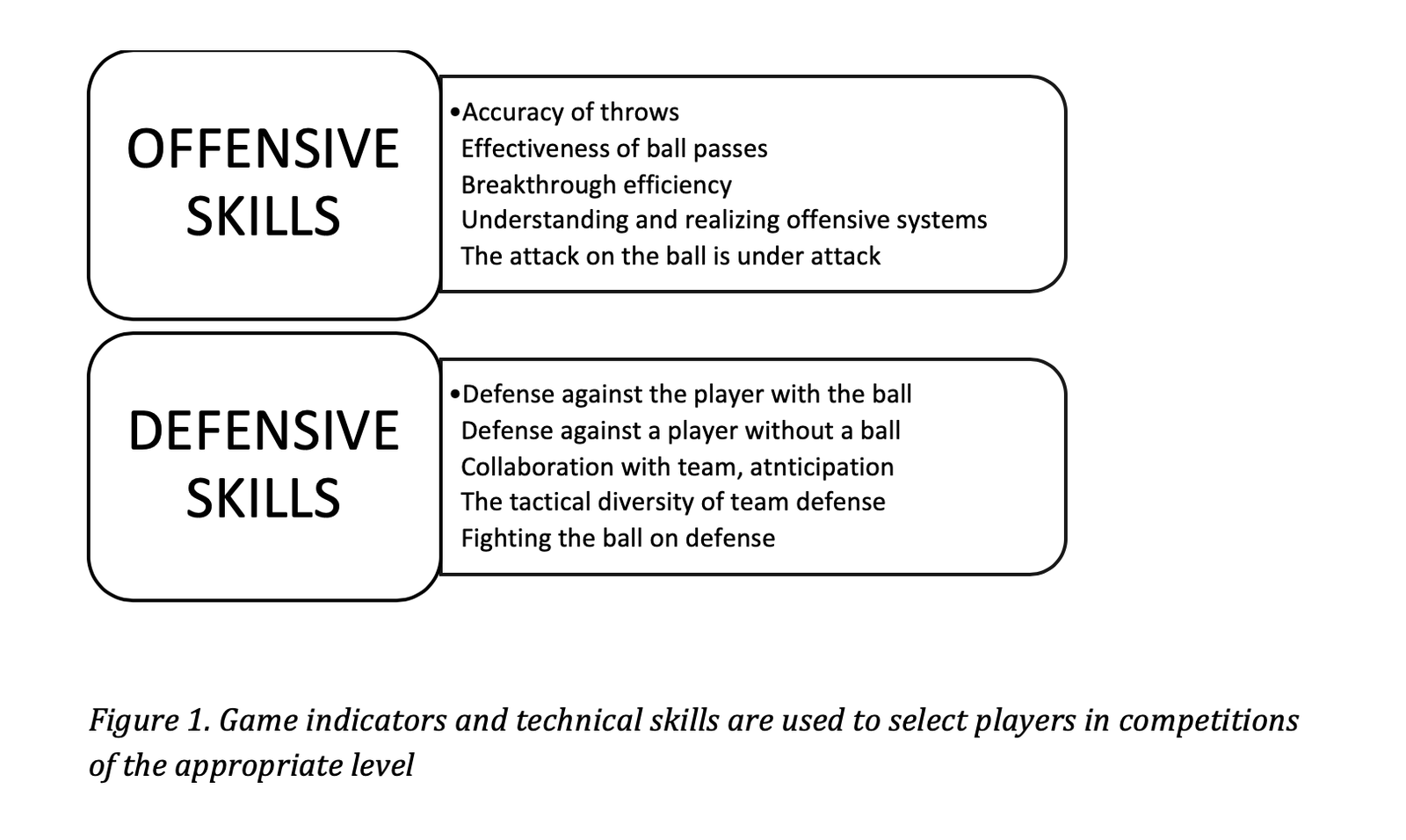 In the final selection phase, players who are in the best teams, clubs, teams are often better not only by their physical abilities. Often they also show mental qualities and personality maturity. In Figure 4, we present the personal qualities of the players, which help or disturb to reach good performance, allow them to successfully compete with others. Some features are genetically determined, others can be modified and modified by the athlete (Bump, 2000).

Will – the conscious regulation of one’s activities and behavior, which helps a person to overcome challenges in achieving the goal.

Thinking skills are the process of cognitive performance related to changing game situations, multiple-choice and rejection, ability to make the right decision and act quickly. This feature can often compensate for the lack of physical power.

Self-confidence is the certainty of one’s actions and abilities that the player himself/herself is capable of performing the tasks that are imposed on him/her by the coach, the club leaders and himself.

Perseverance is the consistent pursuit of a goal under difficult objective or subjective conditions.

Motivation is the desire to win, to overcome challenges, to show power, to do something extremely complex, to be proud of our achievements.

Attitudes towards work are the actual results of work performance and the player’s satisfaction or dissatisfaction with their work.

Conflict is a personality feature that reflects itself in the desire to oppose, argue, resent, insult and so on. Conflicting personality can be undesirable in a team. Relationship coherence within a team can be one of the selection criteria.

Decisiveness is a personality feature that shows itself in the ability to judge a situation correctly, to make a timely decision, to implement it consistently and persistently.

Emotional constancy is the ability of a person to calmly call upon changing situations, external anxieties, tensions, successes and failures.

There are several ways to select basketball players for high-skill teams and national teams:

Prof. dr. Rūtenis Paulauskas shares with the IBU community the insights of basketball scientific publications that will help educate fellow coaches from all over the world.

In the basketball world, there is no end to the discussion among coaches, with some claiming that European Euroleague players have an advantage over Europeans competing in the NBA. Others argue, on the contrary, that the NBA is the most competitive league in the world, with the best basketball players competing in it.

There is nothing better than discussing based on scientific arguments when comparing players in the same competition. This study was just carried out at the European Basketball Championship, which also involved European players representing the NBA and European players representing Euroleague teams. Understandably, basketball is not just a game of numbers, but based on official statistics, we can see statistical advantages, trends and their magnitudes. For everything else, we leave it to the coaches to decide.

First of all, it should be noted that NBA Europeans are on average 206.2 cm tall and weigh 104.3 kg, while Euroleague basketball players are 199.3 cm and 97.3 kg. So the first sign is obvious – NBA Europeans are bigger basketball players. Calculating the ratios per 1 minute of play, we see trends in which NBA players blocked more shots, took more rebounds, made two-points field goals, and suffered more fouls. Meanwhile, Euroleague players are clearly superior in one category – passing the ball to teammates.

I wish you a good reading! Stay tuned! Prof. dr. Rūtenis Paulauskas shares with the IBU community the insights of basketball scientific publications that will help educate fellow coaches from all over the world.

Training basketball players, a number of questions arise: what intensity to choose, what duration of exercises, what running speed, how many times do we have to repeat the runs?

The answers to the questions can be given to us by a study in which we see an analysis of physical demands during the match. I would highly recommend paying attention to the discussion section where you will find valuable expert insights.

I wish you a good reading! 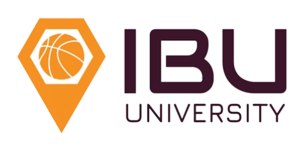